Welcome to the Wallace and Area Museum Heritage and Country Gardens 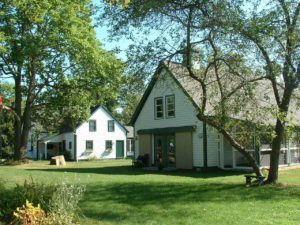 ace and Area Museum’s benefactor, was fond of the museum property gardens and grounds. Many of his original plants and trees can still be found in the largest of the museum’s garden areas.

The written history of our gardens is a work in progress, with still more documents and interviews to gather. In 1990, when the Wallace and Area Museum Society assumed protection of the property, many enthusiastic and hardworking people have either been employed or have volunteered to keep the grounds and garden areas, with their unique varietals, in prosperous and healthy condition.

Wallace resident Owen Langille worked on the gardens with John Kennedy and his mother Mary Davison Kennedy. These are observations quoted from interview notes:

“John Kennedy started all the bedding plants himself in St. John under artificial light. He had approximately fifteen trays, two feet long and fifteen inches wide, which he transported here from New Brunswick – the usual annuals: snapdragons, verbena, cosmos, marigold. At the front of the house, there was mainly ground cover – periwinkle, as we see in that location today. Hawthorn bushes grew along the driveway.” He remembers that there were beds everywhere – mostly annuals, and a few perennials: iris and daylily. One bed towards the orchard was devoted to dahlias,. The bed was eighty feet long and thirty feet wide. “Mr Kennedy bought approximately one hundred and fifty dahlia bulbs for one dollar apiece from St. John. He bought only the highest quality bulbs and seeds. Some of his dahlias were eight inches across.

The orchard grew well. Indeed, Mr Kennedy sprayed pesticides regularly with a large tank sprayer to make sure it did!

One of the original Remsheg Loyalist land grants on 1784, the Kennedy property consists of two hundred and twenty-five mainly wooded acres, including shore frontage on Wallace Bay. A brook runs through the property and empties into the Bay. In the area that is not wooded, an orchard, lawn and perennial gardens are on the west side of the brook, with a fallow field on the east side. An old bridge spanned the brook. A house, barn and several outbuildings were still standing when the Wallace and Area Museum Society became involved. 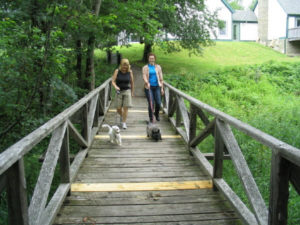 When WAAMS took over the property, work began on restoration of the house to resemble its original outside appearance. A planning document, dated 1995, outlines the process: “This project took much longer than anticipated. Plywood additions to the house, constructed c. 1950-60, were removed. The collapsed east wall of the stone and mortar basement under the kitchen was replaced with concrete. English Ivy, which covered the entire east side of the exterior, was removed and the wall totally re-shingled. The many foundation plantings surrounding the west kitchen entrance and porch had rotted the sills. Both the entrance and the porch had to be replaced. A rusted tin roof and the asphalt shingles it covered, were torn off and replaced with a new cedar-shingled roof.”

Restoration of the gardens:

In 1992 Penny Lighthall was hired as the first curator of the Wallace and Area Museum. For three summers, horticultural graduates from the then Nova Scotia Agricultural College in Bible Hill developed the museum grounds under the supervision of the curator. The first horticulturist hired by the Society in 1993 was Kim Shand. Rosanne Lord was the museum horticulturist in 1994, Kim Lake in 1995 and Paul Muto in 1996-1997. Muto was retained as Outside Site Manager in 1998. Kim Shand drew extensive plans for new garden beds, foundation plantings, a rose garden and herb garden in 1993, and carried out meticulous research on Victorian varietals for the garden, which she envisioned as mid-Victorian era (1840 to 1860).

Volunteer Glenda Waugh notes that the garden beds evolved from plants that were here: mint, wild thyme and mallow. She remembers that the garden was wild then, when the Society took over the property – almost non-existent. Golden glow was prevalent. Golden Glow is a perennial sunflower, an heirloom selection of Coneflower, affectionately called an ‘outhouse plant”because it grows to six feet tall or more. It was planted around outhouses to hide the ignominious little structures. The garden also contained May apple, which bore fruit this year.

In the 1920s transplants were shared among gardeners. Locals would mail away for seeds such as petunia seeds. At one time there were packets of seeds stored here at the museum. The village gave plants to the museum and the museum shared plants with the village. Thanks to the generosity and assistance of friends of the museum and local garden lovers, other heritage varieties have been donated over time and put in place. The result is an enhanced seasonal display, with a riot of color that brightens the grounds and flag stone pathways from spring until late fall.

When the construction of our new museum buildings was underway in 2005, it required changes to the original face of some of the old gardens. In 1995 a large herb garden was planted next to the shed, west of the old home site. Prior to the construction of our new Museum addition, some of the herbs as well as the hostas from the shade garden were transplanted for safe keeping onto an adjoining neighbor’s property. A new herb garden was planted in the spring 2011. While enjoying your visit to the Museum property, you are encouraged to sip a cup of tea, relax in the shade of the large old crab apple tree. While enjoying the sun, admire the large piece of sandstone on display donated by the local quarry, and soak up the ambience of our gardens as if you were in another era.

The shade garden is located under the large ash tree across from the main entrance to the Museum. We are in the process of establishing many shade tolerant ornamentals in this area. Look for several types of hostas, as well as some unusual native plants, including bloodroot, native sedum, and May Apple.

The largest of the gardens has four main sections. We suggest a self-guided tour, as follows:

On the west side of the lawn, you will see a large area of flowering plants interlaced with sandstone pathways, beginning with the daffodils in early spring, old verities of bearded iris, and ending with the asters, which bloom until late fall.The sandstone pathways were laid under the supervision of horticulturist Paul Muto in 1996. 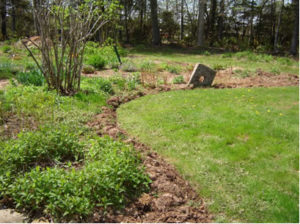 The perennial garden is designed to provide a constantly changing palette of colors throughout the growing season.

Keep strolling along the pathways and see if you can spot some of the more unusual plants in this garden including the Batista, Monks Hood, Bishops Wart, Sedum, Oriental Poppies, Polygonium, Goose Neck Loosestrife, Meadowsweet, Goats Beard and old-fashioned Peonies. The perennial garden has proven to be a favorite place for young children to run ahead of their parents, while visiting the museum, or as a spot for bridal parties to stand while family members record memories. To add to the longevity of colour, as of June 2008 some annuals have been interspersed among the perennials to lengthen and brighten the display. 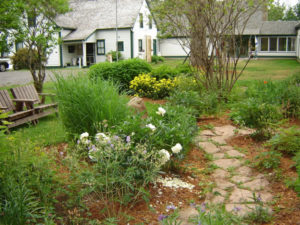 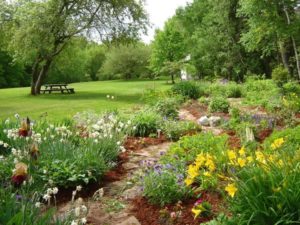 Solomon’s Seal is the tall, drooping plant with white blossoms and berries on the underside of the stem. Golden seal can also be found here. It is a native plant which has recently been developed as an immune system booster by the natural medicine industry.

In the centre of the lawn beyond the crab apple trees is the newly established annual garden. Note the bark mulch used on the ground in our ornamental beds. This is an environmentally friendly way to control weeds and keep the soil surface moist. With its texture and bright colours, the annual garden provides wonderful inspiration for the painters and rug hookers who meet at the museum each week.

Located towards the back of the gardens, the orchard contains several of the original apple trees, including Yellow Transparent, Macintoshes, and Spartans. We continue to maintain the orchard by replacing dying trees with young, heritage varieties of apples.

The following trees were planted in memory of special people from the Wallace area:

You can see from the photographs of the Davison-Kennedy property that there have been many changes to the gardens through the years. The Society inherited a sad remnant of the gardens maintained here by John Kennedy in his heyday. The gardens we enjoy today are the result of countless hours of labour over time. We owe a debt of gratitude to the Society for its belief in the historic value of this property and its special acres. 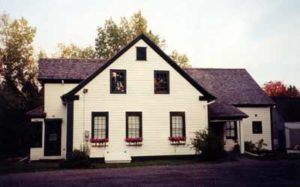 Take time to tour the gardens! Afterward, please join us in our lovely screened porch for a cup of tea and a sweet or two, served on Wednesday afternoons at 2 pm throughout July and August. 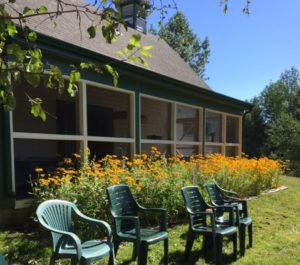